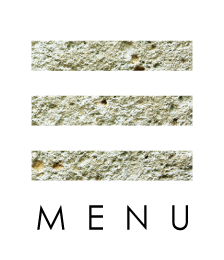 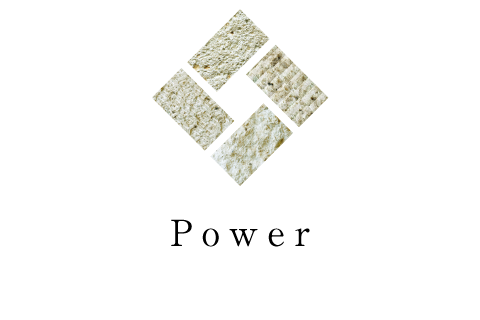 The Power of Zeolite Which Oya Stone Possesses
Oya stone contains natural zeolite, which is superior in adsorption, viscosity, and consolidation. It is used in various contexts, such as water treatment, pollutant treatment, oil treatment, and deodorization treatment, and is quite effective. In the 29 year of the Showa era (1954), it was developed as a compound fertilizer at the Tochigi Prefectural Agricultural Experiment Station. Oya stone corrects acidity as a chemical fertilizer and soil enhancement material, and is recognized for its ability to maintain adjustments. After this realization, a portion was put into practical use. In addition, the Oya stone’s natural zeolite component releases multiple minus ions and strong far-infrared rays, bringing about its healing and maturing effects. Its porous structure allows its ability to adsorb gas and water, so it is effective to prevent sick house syndrome and deodorize as well. It is quite likely that there will be an increasing number of opportunities for zeolite to take the stage, with its high usage value as it includes a variety of minerals such as calcium, magnesium iron, sodium, and potassium.
What is zeolite?
From Utsunomiya University Faculty of Engineering, Department of Construction Professor Hiromi Fujiwara’s “Industrial Utilization Survey Presentation on the Effects of Oya Stone” Zeolite is a mineral that has tiny sponge-like holes. Clinoptilolite is the main component, and a portion of Mordenite also exists. It contains small amounts of impurities, such as feldspar, quartz, and montmorillonite. In addition, the zeolite Oya stone emits minus ions not electrically, but spontaneously. Regular Oya stone emits an amount about three times that of Tourmaline at 80 – 500 pieces/cm3.
Clinoptilolite (plate-like) 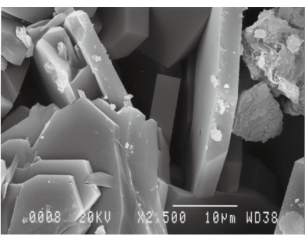 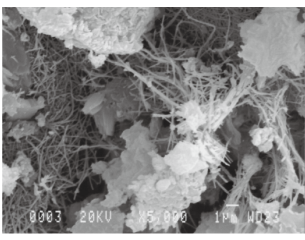 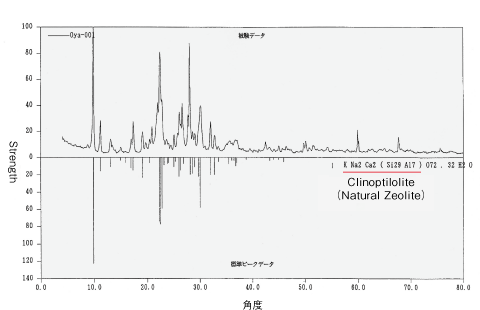 The superior effects of Oya Stone
From Utsunomiya University Faculty of Engineering, Department of Construction Professor Hiromi Fujiwara’s “Industrial Utilization Survey Presentation on the Effects of Oya Stone”
Maturation effect
Miso, pickles, cheese, wine, and Japanese sake are made in a delicious manner.
Oya stone, which has zeolite components that include minerals, emits far-infrared rays, which are a type of electromagnetic wave, as shown in the drawing. Because of that, the water molecules in the food cause resonant vibration, clusters are destroyed, and activation occurs. This can control the advancement of decay and generation of mold, as well as progress maturation while keeping the food fresh. In just a few hours the salt content transforms to appropriate to taste, and the shelf life also improves. There are results from an experiment proving that much free glutamic acid (meat taste component) was detected in uncured ham that is matured underground in an area with Oya stone compared with that which matured in an artificially made facility.

Acoustics
Jass, classic, chorus, and opera music can all be heard beautifully.
It is possible to classify music appropriate for a specific environment based on the desired reverberation time by measuring the average sound absorption rate. Compared with concrete or glass, Oya stone has a high sound absorption rate. In addition to utilizing its warm texture, it is possible to produce a superior acoustic space appropriate for the type of performance or music based on the connection with the space shape and design. 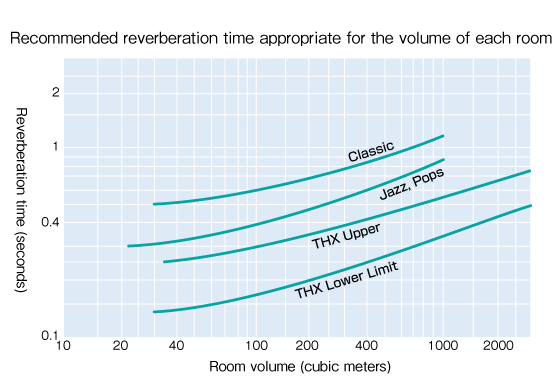 Healing effect
Oya stone has is very effective at healing, and a favorable quality space can be produced that allows one to relax.
A large amount of minus ions are generated. There are various effective uses for Oya stone, such as cell activation and immune enhancement, autonomic nerve adjustment, mental stabilization, air purification, etc., and it is possible to create a relaxed atmosphere. When observing and verifying alpha waves that appear when both one’s mind and soul are in a relaxed state, alpha waves were clearly observed in spaces with Oya stone, and a healing effect was proven, as shown in the data below. (The electromyogram believed to have appeared due to the low temperature was considered to be not applicable.) 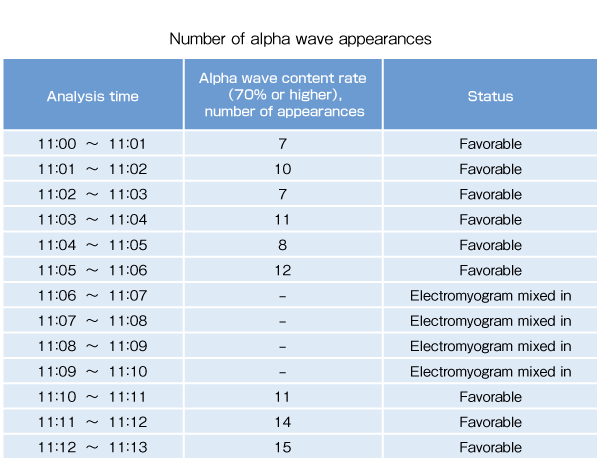